You are here: Home1 / Blog2 / News/Events3 / How to Tame Recalcitrant Ingredients with Technological Processes

How to Tame Recalcitrant Ingredients with Technological Processes 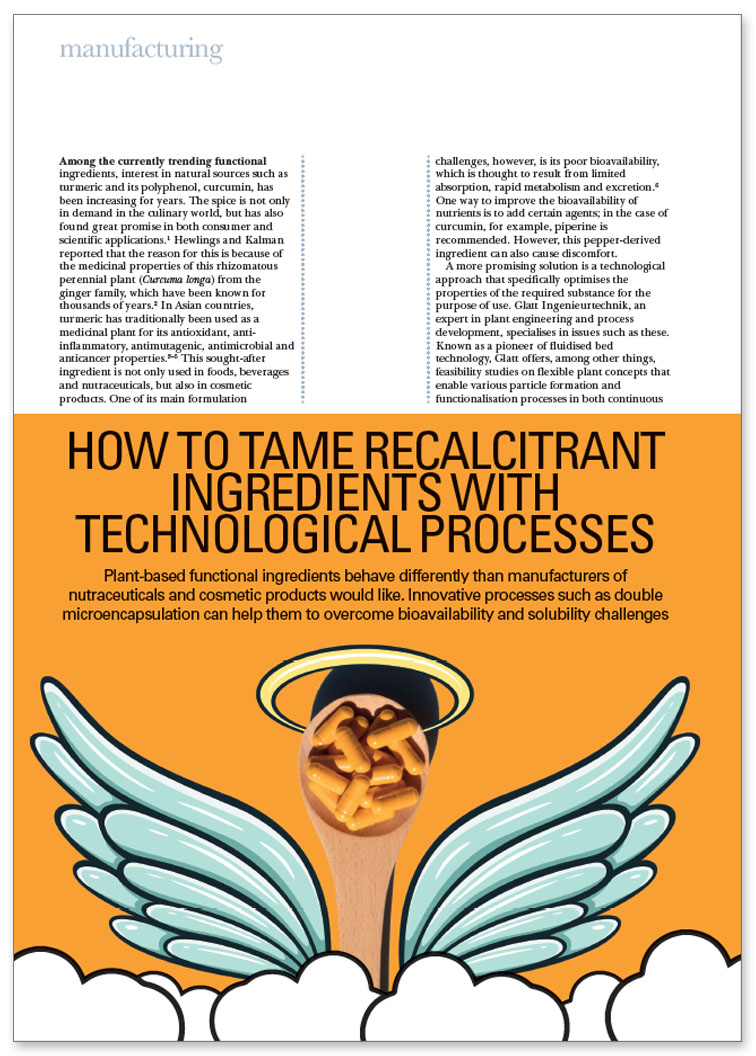 Plant-based functional ingredients behave differently than manufacturers of nutraceuticals and cosmetic products would like. Innovative processes such as double microencapsulation can help them to overcome bioavailability and solubility challenges.

Among the currently trending functional ingredients, interest in natural sources such as turmeric and its polyphenol, curcumin, has been increasing for years. The spice is not only in demand in the culinary world, but has also found great promise in both consumer and scientific applications.1 Hewlings and Kalman reported that the reason for this is because of the medicinal properties of this rhizomatous perennial plant (Curcuma longa) from the ginger family, which have been known for thousands of years.2 In Asian countries, turmeric has traditionally been used as a medicinal plant for its antioxidant, anti-inflammatory, antimutagenic, antimicrobial and anticancer properties.3–5 This sought-after ingredient is not only used in foods, beverages and nutraceuticals, but also in cosmetic products. One of its main formulation challenges, however, is its poor bioavailability, which is thought to result from limited absorption, rapid metabolism and excretion.6 One way to improve the bioavailability of nutrients is to add certain agents; in the case of curcumin, for example, piperine is recommended. However, this pepper-derived ingredient can also cause discomfort.

A more promising solution is a technological approach that specifically optimises the properties of the required substance for the purpose of use. Glatt Ingenieurtechnik, an expert in plant engineering and process development, specialises in issues such as these. Known as a pioneer of fluidised bed technology, Glatt offers, among other things, feasibility studies on flexible plant concepts that enable various particle formation and functionalisation processes in both continuous and batch mode. Together with the expertise of Sphera Encapsulation — who provided proprietary formulation know-how (SpherAQ) — and Lipofoods, who contributed to the development of this new encapsulation approach, a challenging project was tackled.

As mentioned above, the development of curcumin supplements and medicinal preparations is limited because of the low solubility of the compound in water and the associated poor absorption in the intestine when administered orally.6 Moreover, curcumin is also known for its intense colouring power and its peculiar taste (which is not always appreciated by consumers). Furthermore, the raw material cannot be dissolved in aqueous liquids, which limits the ability to use it in most of foods and beverages (Figure 1).

The new process, a double encapsulation approach, first adds functionality to individual curcumin particles; then, in a second step, it enhances particle formation. During the first step, microparticles are produced using an innovative system that combines the advantages of a biodegradable and highly nutritious, protein-based hull with a defined (small) particles size that guarantees transparency, high stability in solution and excellent bioavailability. Neither aggregation nor coalescence phenomena occur and lead to disturbing effects. The technology used to produce these capsules is gentle and does not involve any thermal stress that might affect the integrity of labile molecules.

After encapsulation, the solubility of the curcumin extract in water is dramatically increased (Figure 1). Owing to the small dimensions and the low polydispersity index (PDI) of the particles when dispersed in water, the encapsulated curcumin solution is both transparent and homogenous. Analysis with dynamic light scattering (DLS) confirmed a particle size of 200–400 nm. Besides the small size, the high superficial charge (–30 mV) allows the particles to stay in solution for longer than an encapsulated product made using a simple microemulsion approach. The second encapsulation — the drying step — turns the microcapsule dispersion, layer by layer, into a stable particle.

Many processes can be used to dry liquids. As such, it makes sense to evaluate the desired properties of the final product and whether a powder or a granulate is preferred. This then prompts the question: what influence does the process have on product quality and its application properties? Liquids with a medium to low solids concentration are normally dried in highly efficient spray towers, which produce large volumes of powder using a high-temperature processing gas and very short residence times. However, if specific product characteristics such as bulk densities, good dosing properties or improved solubility are required, further process steps are needed. Here, the normally effective spray drying process quickly becomes a complex multistage procedure.

At this point, spray granulation — especially spouted bed technology — offers several benefits. (Figure 2). By continuously atomising the liquid, whether it’s a solution, dispersion or emulsion, particles form and grow in a fluidised bed to the required size. Shape, density and other properties can be adjusted by varying the operational parameters. In this project, spouted bed technology provided the notable advantages of shorter residence times and, thus, smaller particles within very narrow tolerances. Furthermore, the uniform movement of the particles passing the spray nozzle enables optimal heat transfer and drying of the sprayed-on slurry droplets. The compact, spherical particles (200–600 µm) produced were dust-free, free flowing and highly soluble in water.

Nutraceutical Ingredients Lubrizol Life Science (formerly Lipofoods) created Curcushine microcapsules in collaboration with Sphera Encapsulation. The technology applied to the molecule is called SpherAQ, which enables the creation of high-quality encapsulates that are totally soluble in water and can be consumed without the addition of any flavours or aromas.

The process was initially developed at laboratory scale, whereby one challenge was to co-ordinate the individual process steps into a sequence that was suitable in terms of time and throughput. For this purpose, the stability of the intermediate products and the effect of changing the spray solution parameters on the final product had to be evaluated.

This configuration was tested several times at pilot scale before a transfer to production-size equipment could be considered. Here, too, the various process steps had to be adapted to work with larger system components to ensure that the continuous drying process was both safe and efficient.

Besides the physical properties of the product, the curcumin extract also benefited from this innovative approach in terms of masking its taste and odour in solution. Regarding the bioactive characteristics, the formulation was investigated in several studies.

The bioavailability of the produced particles was first evaluated in vitro and confirmed in macrophages (specialised cells involved in the immune response, J774A.1), an immortalised cell line formed from human liver carcinoma cells (HepG2) and human colorectal adenocarcinoma cells (Caco2) that simulate the intestine (Figure 3). This data was then confirmed in an in vivo study, during which a panel of healthy volunteers ingested 750 mg of turmeric extract and the equivalent delivered in Curcushine microcapsules; the results showed a two-fold increase in bioavailability and sustained release during a period of 8 hours (Figure 4).

The commercial preparation, Curcushine, was also tested for its ability to counteract the detrimental effect of reactive oxygen species (ROS) on skin cells (compared with a green tea extract, a well-known antioxidant) and found to be much more effective (Figure 5).

For the successful development of this product, the open co-operation and trust between the various partners was a fundamental necessity. The issues that arose during process development and the required properties of the end product repeatedly challenged all those involved. Questions regarding technology, the co-ordination of different throughputs and systems, as well as occupational safety, all had to be addressed to guarantee a stable production process and, most importantly, the crucial aspect of product quality. Step by step, an encapsulation technique was developed that can be used for a wide variety of products to improve both bioavailability and shelf-life stability.

Optimizing the product properties of your ingredients