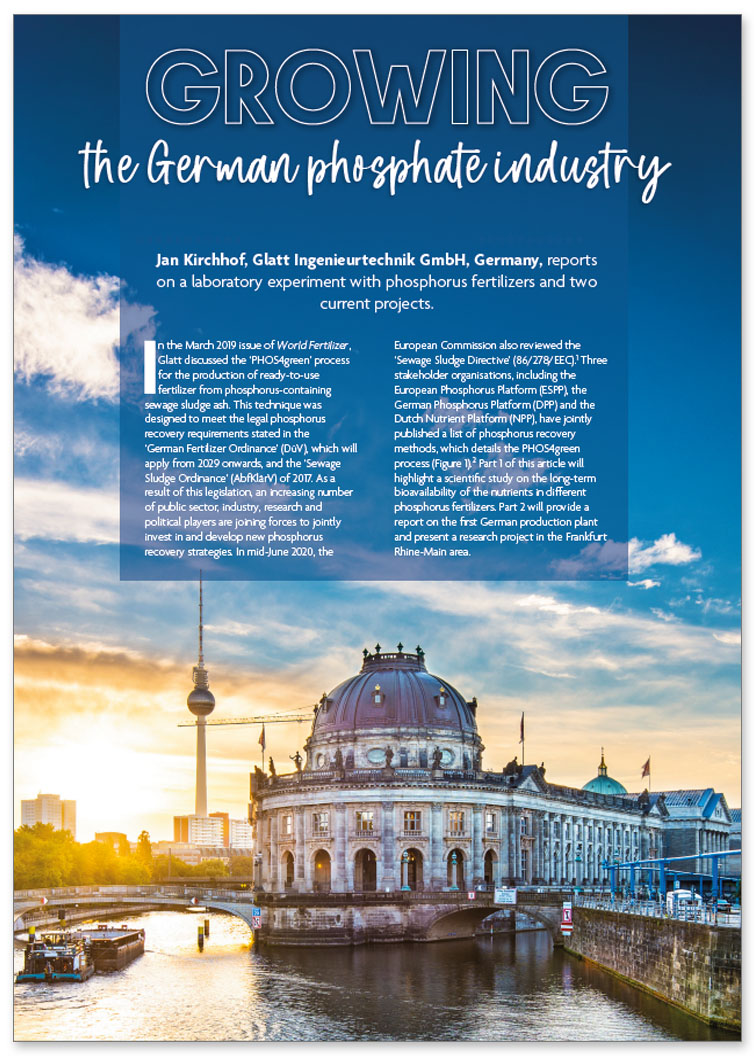 Part 1 of this article will highlight a scientific study on the long-term bioavailability of the nutrients in different phosphorus fertilizers. Part 2 will provide a report on the first German production plant and present a research project in the Frankfurt Rhine-Main area.

In the March 2019 issue of World Fertilizer, Glatt discussed the ‘PHOS4green’ process for the production of ready-to-use fertilizer from phosphorus-containing sewage sludge ash. This technique was designed to meet the legal phosphorus recovery requirements stated in the ‘German Fertilizer Ordinance’ (DüV), which will apply from 2029 onwards, and the ‘Sewage Sludge Ordinance’ (AbfKlärV) of 2017. As a result of this legislation, an increasing number of public sector, industry, research and political players are joining forces to jointly invest in and develop new phosphorus recovery strategies.

In mid-June 2020, the European Commission also reviewed the ‘Sewage Sludge Directive’ (86/278/EEC).[1] Three stakeholder organisations, including the European Phosphorus Platform (ESPP), the German Phosphorus Platform (DPP) and the Dutch Nutrient Platform (NPP), have jointly published a list of phosphorus recovery methods, which details the PHOS4green process (Figure 1).[2]
Part 1 of this article will highlight a scientific study on the long-term bioavailability of the nutrients in different phosphorus fertilizers. Part 2 will provide a report on the first German production plant and present a research project in the Frankfurt Rhine-Main area.

Ryegrass (Lollium) and lucerne (Medicago sativa) were used as experimental plants to represent agricultural crops with potentially different levels of phosphorus uptake. Ryegrass is a model cereal, whereas lucerne exemplifies a large number of dicotyledonous crops (potato, beet, rape, etc.). With these species, it is possible to harvest the above-ground biomass several times and, as such, characterise the medium-term dynamics of the fertilizers used. In the experiment, five harvests were done at intervals (adjusted to the growth rate of the plants) of about four weeks. The rationale was that phosphorus compounds that are initially highly water-soluble can change into poorly soluble ones and are then no longer available to plants (also known as phosphate ageing). In the same way, phosphorus can be released from compounds that are initially poorly soluble.

Root excretions are an important example, particularly regarding the release of acids. Dicotyledonous plants such as lucerne usually release significantly more acids than monocotyledonous ryegrass. There are also noted differences in the phosphorus uptake capacity within dicotyledonous plants. Especially in rape, high uptake levels are seen even with fertilizers that release phosphorus poorly. Lucerne seems to represent rather the “average crop.”

The trials were done as vessel tests; to a certain extent, these are artificial owing to the limited soil volume, but offer a valuable — and unadulterated — assessment of the fertilization effect. Using this standard method for the (first) scientific evaluation, the fertilizer effect could be assessed in isolation and under otherwise constant conditions. For studies such as these, it is essential that the soil does not contain significant phosphorus reserves to be able to directly assess the effect of the fertilizers. Furthermore, the environmental conditions and the substrate are practically identical for all plants. In the same way, naturally occurring mineralisation and transformation processes that release phosphorus from the soil could also be eliminated. A standard triple superphosphate fertilizer was used as the control, thus enabling an unrestricted comparative assessment.

During the trial, the fertilizers were first milled and then mixed into the soil. This was necessary because of the relatively small amount of phosphorus per container (0.3 g); when applied as a pellet, this would have led to a very different distribution in the root area, which would have caused the roots of the germinating plants to come into contact with the fertilizer at different times. This could have falsified the results. Application in solid form corresponds to common practice.

To evaluate the fertilisation effect, the biomass formed (dry matter) and the phosphorus concentration in the above-ground plant parts were assessed. The harvested fresh mass (quantitative measurement) provides an indication of the fertilisation effect and can be statistically evaluated. However, the dry matter (biomass) is the relevant parameter. However, this is only available at a later stage, when the plant material has completely dried out. The product of both factors is the so-called phosphorus-depletion parameter that’s used to assess the absolute amount of phosphorus absorbed into the shoot. There is usually a close correlation between the fresh and dry matter, as the water content of the plant parts is the same in all varieties. There may be differences if the plants are watered differently or if there are differences in water absorption, but this is not to be normally experienced during experiments with phosphorus fertilizers.

The fertilizers produced using the PHOS4green process result in the formation of a similar amount of fresh mass compared with those treated with triple superphosphate (Figure 3). The total dry matter produced after four harvests was not significantly affected by the positive control (Figure 4). The plants produced the same amount of biomass as those fertilized with triple superphosphate. The author recommends following up the successful vascular test with additional field trials.

Part 2: mono-combustion on the rise

The number of ways to recycle a secondary raw material are as varied as their source. It has already been established that ash-based processes have a very high potential. According to a study by the consulting firm ecoprog, 40 projects for new mono-incineration facilities are currently planned nationwide.[4] Several studies show that the capacity for the incineration of sewage sludge will be increased (by new plants and modernisation of existing plants) by approximately 1.25 million t of sludge (dry substance). The capacity in 2020 was approximately 700 000 t of sludge (dry substance).

In the metropolitan Frankfurt-Rhine-Main region, nine players have joined together to form a consortium: ”Regional phosphorus recycling in the Rhine-Main area under consideration of industrial and agricultural material cycles.“ The concept funded by the German Federal Ministry of Education and Research (BMBF), is considered to be a lighthouse project that will strengthen the sustainable use of phosphorus in one of Germany’s most important economic regions.[5] The project has a firm foundation as the infrastructure for the mono-combustion of sewage sludge is already well developed and potentially expandable.

The aims of the research project are as follows:

From a technological point of view, the aim is to remove any heavy metals from sewage sludge ash before the actual phosphorus recovery process. Under the direction of the Technical University of Darmstadt (TU Darmstadt), a large-scale phosphorus recovery concept is being developed for the metropolitan region and a demonstration plant is being built to test the process. As specialists in materials management, the scientists of the Department of Wastewater Technology at the IWAR Institute of the TU Darmstadt are also involved in basic research and much of the analysis.

The Fraunhofer Research Institution for Materials Recycling and Resource Strategies IWKS focuses on material cycles and resource strategies; in cooperation with TU Darmstadt, it’s developing the process that removes heavy metals from ashes. Among others, Glatt is contributing to two sub-projects: the planning and construction of the container facility and investigations into the spray granulation of purified secondary phosphorus. Hence, Glatt will be supplying the engineering and container modules for the practical implementation in the Industriepark Höchst.

Accordingly, the main areas of work are to:

In May 2021, the first PHOS4green production plant was put into operation. The German fertilizer manufacturer Seraplant runs the plant, which is designed to produce 60 000 tpy of phosphate-based straight and compound fertilizers (Figure 4). At the heart of the process is the AGT 750 spray granulator. This is the first time in Germany that a closed-loop process for phosphorus recycling has been implemented on an industrial scale. The target groups are farms in conventional and organic farming, the agricultural and horticultural wholesale trade and the fertilizer industry. Glatt was commissioned to plan and implement the complete plant technology – from the delivery of raw materials and preparing the suspension, to fluid bed granulating the finished fertilizer. Seraplant has invested €20 million in the construction with the support of the state of Saxony-Anhalt. Further funds amounting to almost €5 million came from the ‘Improvement of the regional economic structure’ (GRW) support programme. The GRW is part of the all-German support system for structurally weak regions under the leadership of the Federal Ministry of Economics. The production plant has created more than 20 new jobs.