You are here: Home1 / Blog2 / Published Papers3 / Phosphorus recovery: Like a phoenix from the ashes 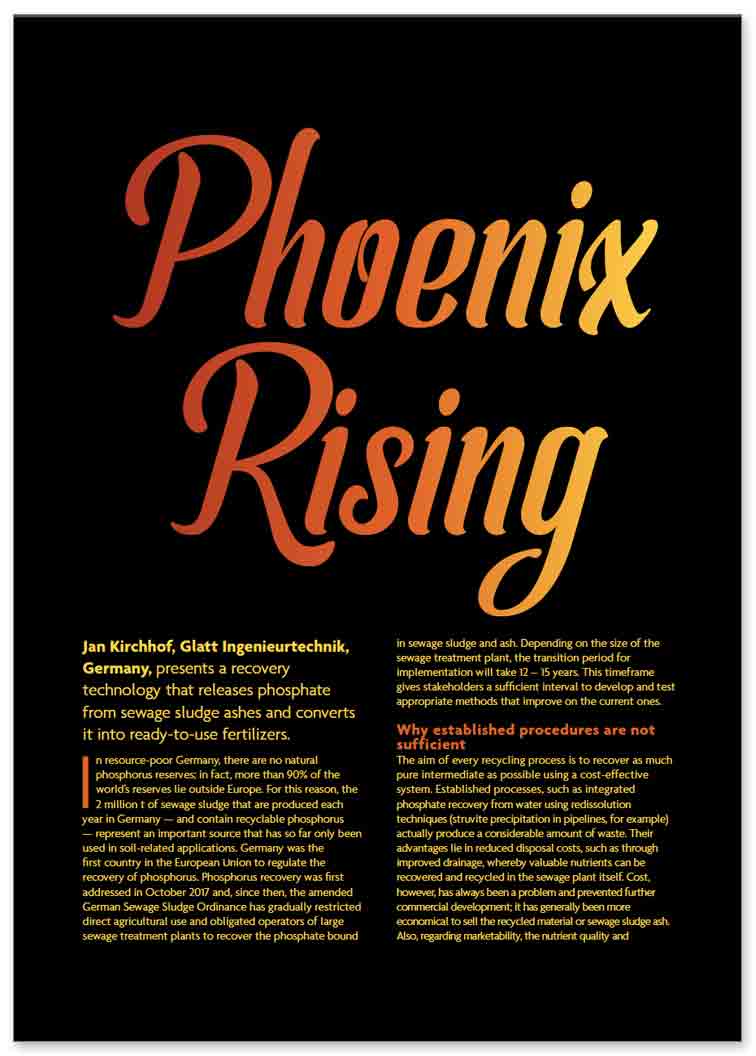 Phosphate from ash: Why established processes are not sufficient and how PHOS4green technology leads to success.

In resource-poor Germany, there are no natural phosphorus reserves; in fact, more than 90% of the world’s reserves lie outside Europe. For this reason, the two million tons of sewage sludge that are produced each year in Germany — and contain recyclable phosphorus — represent an important source that has so far only been used in soil-related applications. Germany was the first country in the European Union to regulate the recovery of phosphorus. Phosphorus recovery was first addressed in October 2017 and, since then, the amended German Sewage Sludge Ordinance has gradually restricted direct agricultural use and obligated operators of large sewage treatment plants to recover the phosphate bound in sewage sludge and ash.[1] Depending on the size of the sewage treatment plant, the transition period for implementation will take 12–15 years. This timeframe gives stakeholders a sufficient interval to develop and test appropriate methods that improve on the currently available ones.

Why established procedures are not sufficient

The aim of every recycling process is to recover as much pure intermediate as possible using a cost-effective system. Established processes, such as integrated phosphate recovery from water using redissolution techniques (struvite precipitation in pipelines, for example) actually produce a considerable amount of waste. Their advantages lie in reduced disposal costs, such as through improved drainage, whereby valuable nutrients can be recovered and recycled in the sewage plant itself. Cost, however, has always been a problem and prevented further commercial development; it’s generally been more economical to sell the recycled material or sewage sludge ash. Also, regarding marketability, the nutrient quality and performance of the recycled materials often fail to meet the requirements for standard fertilisers — as set out in the Regulation concerning the distribution of fertilisers, soil additives, growth media and plant protection products (Fertiliser Regulation – German: DüMV). One of the reasons for this is that the procedures are generally restricted to a specific raw material matrix. Fluctuations in the nutrient composition and heavy metal contamination can usually not be compensated for (at least to the desired extent).

From the customer’s point of view, such as farmers, there are also expectations concerning user-friendliness and the usual range of applications. Therefore, a suitable manufacturing process that delivers directly saleable and usable phosphate products should not be underestimated.

Working with a partner and in co-operation with the Materials Research and Testing Institute at the Bauhaus University Weimar, Glatt, a globally recognized market leader in fluid bed technology, has developed a highly efficient process that initially releases phosphate from sewage sludge ashes and subsequently transforms it into ready-to-use fertilizer granules using a fluidized bed spray granulation process. The project was funded by the German Federal Foundation for Environment (DBU). In a DBU publication, Dr Maximilian Hempel, Head of the Department of Environmental Chemistry and of the “Resource Efficiency” project group at DBU, said that this process shows how phosphorus can be both recovered in an environmentally friendly way and also used directly in the form of a marketable product. Hempel also added that the new process could effectively close a gap in the phosphorus cycle that had previously made it difficult to use the substance sustainably.[2]

To initiate the conversion reaction, a suspension is produced from the phosphate-containing ash using a mineral acid and (optional) water. This step is necessary to make the ash-based nutrients available for absorption by plants. The suspension is always specifically developed for the required end product and adapted according to the available raw materials. As the raw material components are perfectly homogenized, the suspension and the phosphate conversion reaction are separated from the granulation process, which offers a number of procedural advantages. The spontaneous and vigorous reaction that occurs when the phosphate-containing ash and the mineral acid are combined is therefore kept under control as the free acid has already reacted in the suspension. If necessary, further nutrient components — in liquid or solid form — or additional phosphate sources can be added to the suspension. The method is suitable for a variety of ash types and the subsequent spray granulation process refines the recycled material into a marketable product. The ensuing granulation process converts the digested phosphate into directly usable fertilizer granulates.

Spray granulation with fluidized bed technology is one of the leading processes when it comes to particle design, defined particle size, dust-free and safe handling and perfect dosing — in other words, everything that must be considered when manufacturing fertilizer granulates from liquids and powders. The granulation process is based on established fluid bed technology and the principle of particle turbulence resulting from an upwardly directed process gas stream – usually air (Fig. 1). Compared with conventional spray drying, fluidized bed drying offers numerous advantages because the powder is not just dried, it’s imbued with precisely defined structures and parameters (see Formulating for Success, World Fertilizer issue March 2019). As is well known, one of the most highly valued advantages of fluid bed technology is that all the necessary production steps can be done in a single continuous process and without interruptions or machine changes. That means that granule formation and subsequent drying can be achieved in a single process step.

With regard to phosphate recovery for fertilizer production, the process duration can vary considerably depending on the raw material(s) and end product. In addition, the various formulations behave very differently when in suspension (some tend to stick together, for example). As such, a flexible and adaptable technology is needed. The solid-liquid mixture of the phosphate suspensions is sprayed into the process chamber; here, the solvent evaporates immediately. The remaining solids are converted into small particles that act as “carrier cores” for the formation of new fertilizer granulates. In a repetitive process, the entire surface of each of these primary particles is wetted with spray fluid. This evaporates and forms a solid shell of several layers around the carrier core (Fig. 2). Once the target size of the fertilizer granulate has been reached, the product is discharged. The granules are dust-free, long-lasting and storage-stable, and have a compact, homogenous structure. They can be directly bagged, marketed and dosed as per a normal fertilizer. Furthermore, being dense, the abrasion-resistant surface reduces undesirable drift effects during application.

A method for different compound fertilizers

In addition, different compound fertilizers (such as NP, PK and NPK) can be produced using the same procedure by adapting the recipe accordingly. The nutrients in each individual grain are distributed according to the specific application. Parameters such as particle size, residual moisture and solids content can be specifically influenced to achieve a wide range of product properties. Spray granules are characterized by a high particle density and a low specific surface area, which makes them well suited for the subsequent application of functional coatings. Combinations can also be easily achieved and integrated into the process. In the simplest scenario, the optimization of product properties ranges from optical branding in defined colors to the protection of active ingredients against undesirable storage, transport or application-related influences (Fig. 3).

From an ecological standpoint, owing to the fact that phosphate contents of up to 46% can be achieved, they are suitable as both soil- and plant-specific fertilizers that comply with the Fertilizer Ordinance (in this example: of the German Fertilizer Regulation DüMV). And, from a marketing perspective, the finished fertilizer is immediately merchandisable and can be used by farmers in organic as well as conventional farming (Fig. 4). Fluctuations in the composition of the sewage sludge ash are easily compensated by adjusting the recipe, which ensures a consistently high quality. The process is already suitable to meet today’s market demands for the production of ready-to-use standard and multicomponent fertilizers based on recycled phosphate.

In comparison with the established processes for phosphate recovery mentioned earlier, which produce considerable amounts of waste, this procedure is 100% waste-free — meaning that the ashes can be reused completely. Additionally, the entire process is also waste-free. No harmful intermediate products or exhaust gases are produced during the process. Compared with conventional phosphate fertilizers, the new versions contain 92% less cadmium and around 96% less uranium. In addition, the pollutant content of the new fertilizer granulates is significantly lower than legal limits (Fig. 5). It is also interesting to note from an economic point of view that no raw phosphate and less energy are required for fertilizer production.

By using spray granulation in a fluidized bed, domestic phosphorus sources can be used and marketable fertilizers can be produced directly from sewage sludge ash. The process is suitable for the production of soil/plant-specific nutrient fertilizers that comply with the German Fertilizer Ordinance in this example. Of course, the production process precedes the sale. This can be done with a Glatt system or by commissioning a contract manufacturer. As the process is already established, contract manufacturing enables immediate implementation if a recycling process is prescribed by law or is required to protect the environment and avoid waste.

PHOS4green presented at the DWA Conference 2019 in Weimar, Germany